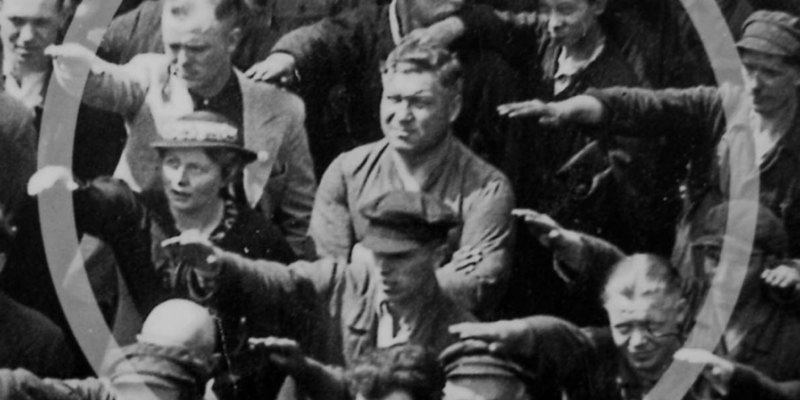 How many people/groups have been referred to in this way? 👇

“___________ are a scourge and strong argument for re-education camps, the immediate seizure of their property, and putting their children into protective custody.”

Insert the name of any race, religion, or ethnicity – Blacks, Whites, Asians, Hispanics, Native Americans, Jews, Muslims, etc. – and there would be OUTRAGE over this sentiment. And rightly so, for in the not-so-distant past all of these groups have experienced such hate. We teach this history to students in social studies classes because we know “those who do not learn history are doomed to repeat it”.

⚠️ Rick Wilson, a New York Times bestselling author, directed those exact words to parents who exercise their constitutional right to decide the appropriate medical procedures for themselves and their children, not the government or society. Wilson dehumanizes these parents and disparagingly refers to them as “anti-vaxxers”, while ignoring the fact that many, if not most, of these parents did in fact vaccinate their children and they were subsequently injured or killed by them.

Why would any individual, much less a consultant for a conservative political party, think that this type of inflammatory language is acceptable in modern civil society?

Is he not familiar with the official GOP Platform which states:

“We support the right of parents to determine the proper medical treatment and therapy for their minor children… Parents have a right to direct their children’s education, care, and upbringing.”

More than once history has shown us this kind of bigoted rhetoric manifest into a horrific reality while the world stood by.

1619-1865 Slavery in the United States – during this time more than 7 million black slaves were imported from Africa and the U.S. Constitution acknowledged the institution of slavery and guaranteed the right to repossess any “person held to service or labor”. Slaves were considered three-fifths of a person for the purposes of taxation and representation in Congress.

1831-1839 Trail of Tears – approx. 60,000 Native Americans in the United States are forced from their ancestral homelands in the Southeastern United States to areas west of the Mississippi River that had been designated as Indian Territory.

1932-1933 The Holodomor (aka the Terror-Famine, Great Famine, Famine-Genocide in Ukraine, or the Ukrainian Genocide) – a man-made famine created by Joseph Stalin because he wanted to both replace Ukraine’s small farms with state-run collectives and punish independence-minded Ukrainians who posed a threat to his totalitarian authority. Stalin was responsible for killing an estimated 3.9 million Ukrainians by starvation.

1932-1972 Tuskegee Experiment – the unethical, U.S. sponsored 40 year medical study involving 600 black men where researchers knowingly failed to treat patients appropriately after the discovery in 1947 that penicillin was an effective cure for the disease they were studying (syphilis). By the time it was shut down due to an investigator leaking the story to a reporter, 128 participants had died, at least 40 spouses had been diagnosed with syphilis and 19 children had been infected with it at birth.

1941-1945 The Holocaust – the systematic, bureaucratic, state-sponsored persecution and murder of 6 million Jews by the Nazi regime and its collaborators.

ALL OF THESE ATROCITIES WERE CONSIDERED LEGAL WHEN THEY OCCURRED.

WILL THE FOUNDATIONS OF OUR NATION BE FURTHER ERODED?

“Congress shall make no law respecting an establishment of religion, or prohibiting the free exercise thereof; or abridging the freedom of speech, or of the press; or the right of the people peaceably to assemble, and to petition the Government for a redress of grievances.”

The First Amendment to the United States Constitution

“The right of the people to be secure in their persons, houses, papers, and effects, against unreasonable searches and seizures, shall not be violated, and no Warrants shall issue, but upon probable cause, supported by Oath or affirmation, and particularly describing the place to be searched, and the persons or things to be seized.”

The Fourth Amendment to the United States Constitution

“…nor shall any State deprive any person of life, liberty, or property, without due process of law; nor deny to any person within its jurisdiction the equal protection of the laws.”

The Fourteenth Amendment to the United States Constitution

International treaties and codes have resulted from these evil events to prevent future atrocities, but will the world listen to reason or fall prey to fear again?

WILL A SUBSET OF THE POPULATION BE SEEN AS LESS THAN HUMAN . . . AGAIN?

“Whereas disregard and contempt for human rights have resulted in barbarous acts which have outraged the conscience of mankind, and the advent of a world in which human beings shall enjoy freedom of speech and belief and freedom from fear and want has been proclaimed as the highest aspiration of the common people,”

“The voluntary consent of the human subject is absolutely essential. This means that the person involved should have legal capacity to give consent… without the intervention of any element of force, fraud, deceit, duress, over-reaching, or other ulterior form of constraint or coercion”

We at Health Freedom Louisiana would like to encourage civil discourse, critical thinking, and most importantly, empathy for our fellow man.

While Mr Wilson encourages bigotry, hatred, and police action similar to the Nazi’s in Germany, we encourage you to BE THIS 👇 MAN.

Be resolved to stand against discrimination, bigotry, hatred, and ignorance.

Let’s stop history from repeating itself.

Much Ado about Mumps

Mumps on a highly vaccinated Louisiana college campus?! You don’t say?! That’s probably because any…

Health Freedom Louisiana is proud to host screenings of Vaxxed II: The People’s Truth in…