January 22, 1973 Roe v. Wade – The U.S. Supreme Court (SCOTUS) struck down a Texas law banning abortion, on the basis that women had a Constitutional right to abortion via the right to privacy protected by the 14th Amendment. Prior to Roe v. Wade abortion had been illegal in most places in the U.S., most of the time.

Since Roe v. Wade, many states have passed laws limiting abortion while others, like Colorado, have gone to the other extreme, prohibiting any limits on abortion, including allowing abortions until the moment of birth.

June 24, 2022 Dobbs v. Jackson Women’s Health Organization – SCOTUS overturned Roe v. Wade, clarifying there is no Constitutional right to abortion. This means they gave the power to legislate abortion (to prohibit, limit, or allow it) back to the States. We HIGHLY recommend everyone read Justice Alito’s opinion, which puts the issue – whether or not there is a Constitutional right to abortion – into perspective and showcases the extent the Court’s ruling on Roe was wrong. Indeed, even Justice Ruth Bader Ginsburg, who was fiercely pro-choice, criticized the Roe ruling multiple times.

Each State can now pass its own legislation regarding abortion. Louisiana, like several other states, already had in place what’s known as “trigger laws” – laws that had been passed and signed by the Governor that would become effective immediately the moment Roe was overturned. Unfortunately, just like we saw throughout the Covid pandemic, fear-mongering continues, with blatant lies being circulated to enrage and instill fear into the public, especially women.

Louisiana Abortion Laws, Triggered into Effect by the Dobbs Ruling

As stated previously, Louisiana is one of the states that had trigger laws in place, most notably Act 545 and Act 548. Health Freedom Louisiana comprises thousands of men, women, and parents who do not all agree on the abortion issue, but nor do we have to. One of our common grounds, however, is fighting for informed consent. In order to have true, informed consent, one must have accurate information without pressure, retaliation, or discrimination. So when we saw this graphic, which so grossly misrepresents the facts, circulating widely, we knew we wanted to make an active effort to accurately inform the public, especially young women. 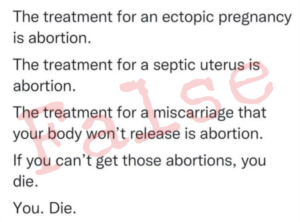 Not only is the graphic above completely inaccurate (we added the word false to it), those very things it mentions (ectopic pregnancy, miscarriage) are specifically cited in the laws as exceptions. There is no excuse for such brazen untruths other than to push propaganda. This is fear-mongering at its worst.
In response, we have created the graphics below to dispel the most common myths about the Dobbs ruling that are being used by the media and others to misinform and manipulate through fear. Please download via the links below and share widely to educate as many as you can.

You can download all of the pictures from our shared folder: https://www.dropbox.com/sh/kvu3kvw4byfb164/AAC9o8bDRyzQshhDu4_GApR6a?dl=0

They are also available in a pdf which you can download here.

Like the resources we are providing? Support our work by donating today!