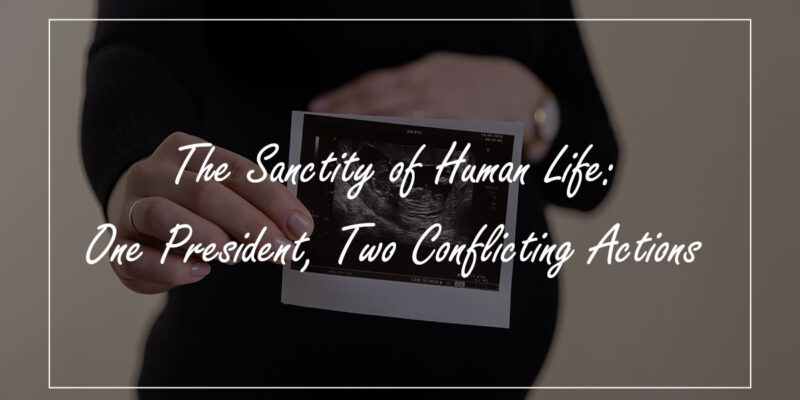 by Mya Olsen and Fiorella Trapani

The National Sanctity of Human Life Day is this Sunday, January 19.

Thirty-six years ago President Ronald Reagan issued a proclamation establishing the first National Sanctity of Human Life Day, declaring: “reverence for human life and recognition of the sanctity of individual life are among the defining characteristics of a just civil order.” He went on to issue that proclamation every year of his presidency thereafter.

The right to life itself is so vital that it was the first of the “unalienable rights” affirmed by our Declaration of Independence – Life, Liberty, and the pursuit of Happiness. President Reagan wrote: “the United States of America was founded by visionary people who believed, and said forthrightly, that the test of any just political system lay in whether it affirmed the unalienable rights endowed by God, rights that no civil authority was ever free to deny or contravene”.

He issued this proclamation to remind us that millions of unborn babies are stripped of their right to life, killed by abortions before ever having a chance to live outside the womb and that it is our responsibility to protect “the promise of life stolen from the unborn”.

Tragically, just two short years later, and perhaps unbeknownst to him, President Reagan signed into law a bill that would become the catalyst for disincentivizing vaccine safety measures; exponentially increasing the recommended number of vaccines; and laying the framework for a corrupt network between the pharmaceutical industry, abortion industry, regulatory agencies, and the government, leading to recent vaccine mandates across the country and most ironically, forcing the injection of aborted fetal cells into American children. The very same industry President Reagan spoke so adamantly against was given unprecedented power over the people, thanks to his signature.

It was the 1986 National Childhood Vaccine Injury Act. This law removed all liability from vaccine manufacturers, so citizens could no longer sue them for any injuries or deaths caused by their products.

More than one hundred babies from elective abortions have been used for vaccine research and development to date, and the numbers continue to rise as the practice is ongoing. Currently, there are two fetal cell lines being used in some vaccines recommended for children: WI-38 and MRC-5. The following vaccines are on the CDC’s recommended child immunization schedule and contain one of the fetal cell lines:

Also containing human fetal cells is the Zoster (shingles) vaccine, which is recommended to adults 50 years and older.

For a deeper look into vaccine manufacturing, listen to the testimony of Dr. Stanley Plotkin. (1)

Dr. Plotkin developed the rubella vaccine which is still used today in the MMR and has spent his career working on the development and application of other vaccines and is a consultant to several pharmaceutical companies in the vaccine industry.

While being deposed under oath in January 2018, Dr. Plotkin testifies to the fact that 76 babies (fetuses) were used IN JUST ONE STUDY.

He also discusses the process by which aborted babies are used for vaccine research:

As stated earlier, aborted babies are still being used today for vaccine research.

Because all humans deserve the dignity of a name, these cell lines have been given names: Winnie (WI-38), Mikey (MRC-5), and Dani (Walvax-2). These children were never given the chance to live, but we will honor them by calling them by name. (3)

Vaccine mandates force parents and children to support and take part in the abortion industry by forcing parents to have their children injected with vaccines manufactured using aborted fetal cells and which still contain fragments of human DNA in the final product. (4)

In observance of Sanctity of Human Life Sunday may all people pause to recognize the role they willingly or unknowingly play in the destruction of innocent human lives and stripping the most vulnerable of their unalienable right to life.

May these words ignite the desire to defend the personhood of EVERY individual and the sanctity of ALL human life.

Please join us for our Rotunda Day! When: Thursday, March 17, 2022Where: In the Rotunda…

Letter to the Governor: Your Mask Policy Violates Federal Law

HFL Warned the Louisiana Department of Health . . . They Did Nothing

Below is the letter HFL sent to the entire Louisiana state legislature on May 5,…